Now booking REMOTE VOICE OVER DEMO sessions.  As of 2021 all voice reels are now recorded and produced remotely.  This service is for professional voiceover artists who have their own studios.

Listen to Voice reels
LEARN ABOUT THE REMOTE VOICEREEL SERVICE

Want to record a voicereel?

Limiting to working with just two clients a week ensures a personal service.  As a highly experienced voice reel producer, Guy has created the definitive voiceover demo production service with an in-depth understanding of the voiceover industry.

With a focus on employability and pristine production, these custom voiceover showreels will supercharge your voiceover career!

Each voiceover demo is meticulously crafted to highlight your particular skills and unique vocal qualities.

To optimise your chances of success in VO it is imperative that your 'calling card', your set of professional voice reels, are of the highest possible quality.  Guy has worked in worked in the industry for over 20 years. In addition to working with you to create reels you can be proud of, he will also give you actionable advice during the session.  You'll leave the recording session knowing just what to do with your voice reels when you receive them.  Professionally produced voice reels are an essential tool for any actor or voiceover artists who wants to be taken seriously.

"I recently had a commercial and corporate showreel revamp and overhaul with Voiceover Kickstart and I'm so pleased I did. This time I wanted to explore and showcase some different styles and Guy didn't disappoint. Not only was it a really fun and intensive session, the end results are really diverse, crisp and professional - you are a magician!! "

What kind of voicereel do you need?

Whether you are looking to record a Commercial Voicereel, a demo for the Gaming Voice Acting world or a specialist Corporate voiceover demo, you can be sure of the investment of time and money with Guy's voicereel service.  There are plenty of options to record your demo these days, so of course it is always best to ask around.  Most of Guy's work comes through personal recommendation.

► GET IN TOUCH to find out more about the process and options.

“For Voiceovers needing a high-class demo for the business world”

"Unique demo service for demonstrating your character voices. Produced to sound just like the real thing!”

Supercharge your Voiceover Career with the extensive range of programmes, coaching, weekly challenges, a very supportive community, technical guidance and more!  The sister site is located at ►voiceoverkickstart.com

LEARN ABOUT OUR VOICEOVER TRAINING 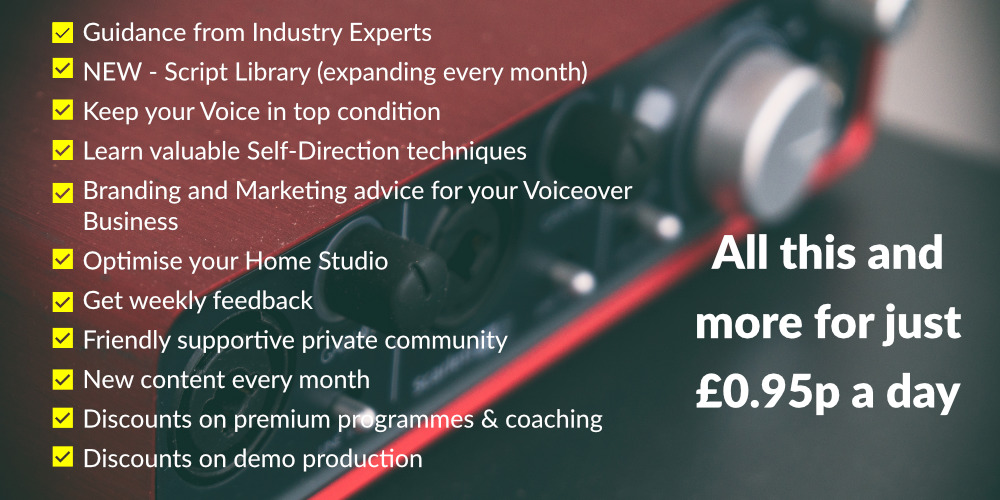 Guy Michaels has produced over 1400 Voiceover Demos since 2006.

Having trained at Mountview Theatre school in the nineties and worked in Voiceover since 1999, he's equally at home working with actors and voiceovers alike. Guy has taught and run workshops at Guildford School of Acting, RADA, ArtsEd, The Actors Centre, The Actors' Guild, VOX, Spotlight UK and more. In addition to this Guy has sat on the voiceover industry panel for Voices.com and is a featured artist for sE Electronics.

► LISTEN to the examples of his work as voice reel producer with hundreds of actors and successful Voiceover Artists.